The Jones Act is the bedrock foundation of the U.S. Merchant Marine.

It requires that ships calling in consecutive ports in the United States be American-crewed, American-owned, and American-made. The name comes from the original sponsor of the legislation, Senator Wesley Jones of Washington, and the actual law is called the Merchant Marine Act of 1920. This federal law, along with related cabotage laws, ensures that companies engaging in domestic trades or services compete equally and are fully subject to U.S. laws and regulations. 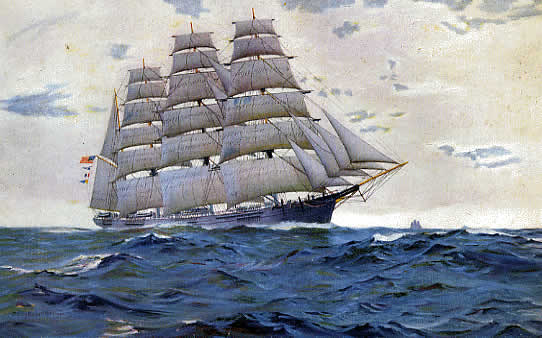 Just as the American Merchant Marine pre-dates the Republic, the Jones Act is itself pre-dated by numerous U.S. cabotage laws established at the founding of the nation, under the First Congress of the United States. It was the first big law passed by the first Congress at the dawn of America in 1789. It is not too much of a stretch to say that American shipping as an American right and a national principle was elemental to the creation of the nation.

This federal legislation includes four primary requirements on vessels carrying goods between U.S. ports. The vessels must be:

These requirements apply to all trade between ports in the U.S. mainland, Alaska, Hawaii, and Puerto Rico. While excluded from the Jones Act, the outlying territories, such as Guam, are covered by similar laws that require vessels be U.S.-flagged, owned, and crewed, but do not include the U.S.-build requirement. But the Jones Act is more than words in an old law. It is instead a way of life that is built into the social, commercial, political, and national defense infrastructure of the American maritime scene. 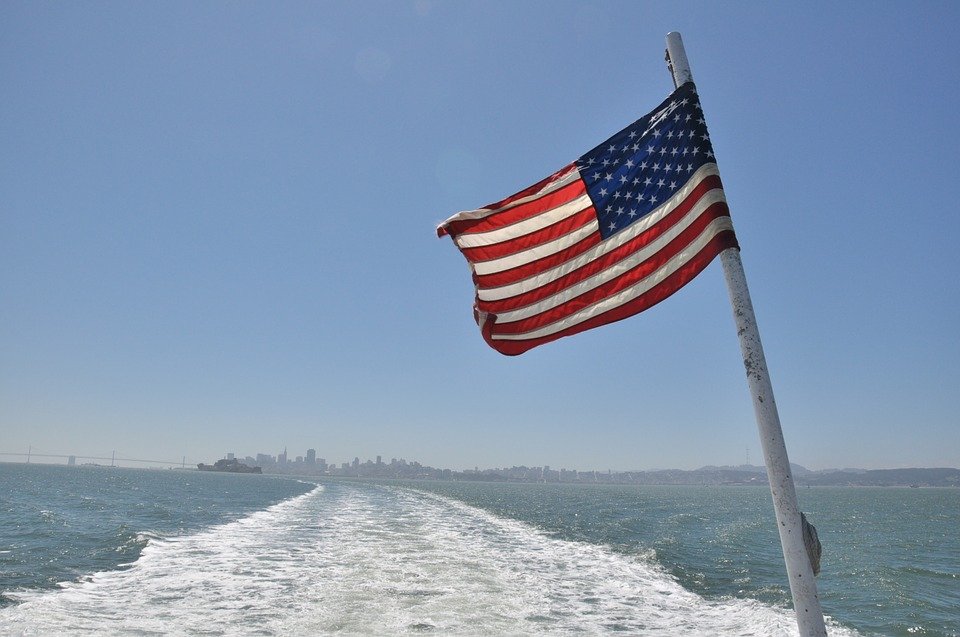 In a remarkable series of actions at the outset of his presidency, President Joe Biden issued a "Buy America" Executive Order that firmly stated the Jones Act is the law of the land and not to be averted. It was bold policy, but the order is not a mere policy statement, it puts teeth into the order by the creation of a "Buy America" watchdog office within the Office of Management and Budget to enforce the terms. It was the strongest Jones Act position in more than fifty years from the U.S. government's executive branch. It also sends an emphatic and unmistakable signal to enemies of cabotage and the U.S. merchant marine that now is not the time to mess with the Jones Act. 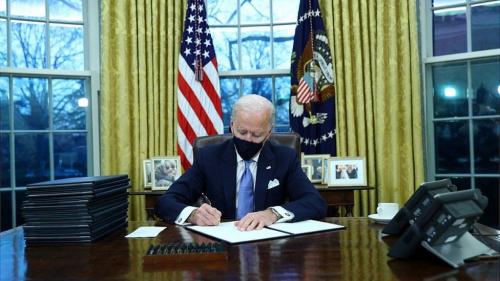 Read the "Buy America" Executive Order in its entirety here.

On Maritime Day, President Biden acknowledged the sacrifice and dedication of American merchant mariners. He said in part:

Called the “fourth arm of defense” by President Franklin D. Roosevelt during World War II, the Merchant Marine established itself as a cornerstone of sealift support for our Armed Forces, sailing through theaters of war to deliver troops and supplies while keeping vital ocean supply lines operating.  The perseverance and dedication of the Merchant Marine contributed to the Allied victory even as they suffered one of the highest casualty rates of any of our military services.

Our merchant mariners also play a critical role in times of peace.  They ensure our economic security by keeping our coastal and inland waterways open to trade, while United States-flagged ships operated by American merchant mariners transport goods across our country and all over the world.  United States maritime freight operations helped support $5.4 trillion of economic activity among the many non-maritime industries that depend on the Merchant Marine for access to world markets.  This movement of goods domestically and internationally continues to ensure America’s economic competitiveness throughout the world — growing jobs and supporting businesses of all sizes here at home.

Our merchant mariners are also critical to extending United States support and assistance to foreign nations and local communities hit hard by natural disasters and devastating crises.  Even in the midst of a worldwide pandemic, these brave men and women have overcome seemingly insurmountable obstacles to fulfill their mission while keeping our Nation’s supply chains running.

The operation of the United States-flagged fleet is essential in contributing to the reduction of greenhouse gas emissions and landside congestion, helping provide current and future generations with a more sustainable means of freight transportation.  The industry is also working to develop and implement new technologies to continue reducing emissions — an effort my Administration is supporting through new international partnerships.

The maritime industry has long provided opportunity for Americans of all backgrounds — and the Merchant Marine continues to advance a more equitable industry in which barriers to entry and advancement are eliminated.

On this National Maritime Day, we honor the brave merchant mariners who provide critical support to our troops stationed in warzones, and who are essential to our Nation’s economic success.  Recognizing the contributions of our merchant mariners, my Administration strongly supports protecting the Jones Act — the cornerstone of our domestic maritime industry.  We must protect those who protect our country."

In 2020, supporters of the Jones Act celebrated it's 100th year of continuous existence in part with recognition that it remains current and critical to our national security and properity.

There were a number of detailed studies released including the following:

In July of 2020, a serious scholarly study entitled "The Impact of the Jones Act on Hawaii" was released that debunked the oft repeated Jones Act criticism that it drives up prices for Hawaii. The economists behind the comprehensive research determined that retail prices were only slightly higher in Hawaii over mainland prices for the same items and there were many factors beyond the Jones Act that accounted for the difference. 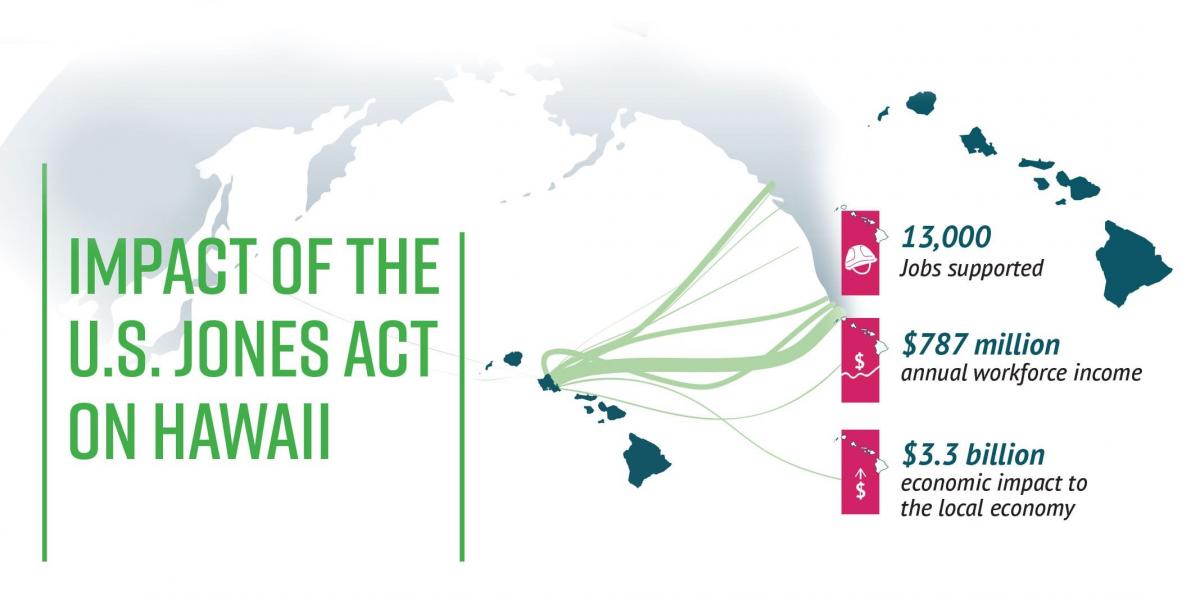 In October of 2020, an important strategic analysis was released that freshened the global importance of the Jones Act as a matter of military readiness. Entitled United States Navy League Study on Global Maritime Competition and the Jones Act it also highlight the efforts of the Chinese and others to expand their influence and control over the sea lanes to the detriment of American businesses and consumers. An introductory excerpt reads "The importance of a strong American commercial maritime industry has been a constant throughout our nation’s history. Laws, policy and practices have been instituted since the earliest days of our country to keep U.S. waters more secure. The case for laws like the Jones Act, the fundamental law of the American domestic maritime industry, has only gotten stronger as rivals like China have publicly built their strategies for global power around control of the maritime sector..."

As noted above, the Jones Act is an anchor for U.S. economic and national and homeland security interests, and requires the transportation of merchandise between two U.S. points to be carried out by American-built, -flagged, -owned, and -crewed vessels.

Moreover, the Jones Act ensures that the vessels navigating our coastal and inland waterways are subject to U.S. laws and operate under the oversight of the U.S. government. As was noted by the Lexington Institute in a 2011 report, “Were the Jones Act not in existence, [the Department of Homeland Security] would be confronted by the difficult and very costly task of monitoring, regulating, and overseeing all foreign-controlled, foreign-crewed vessels in internal U.S. waters.” 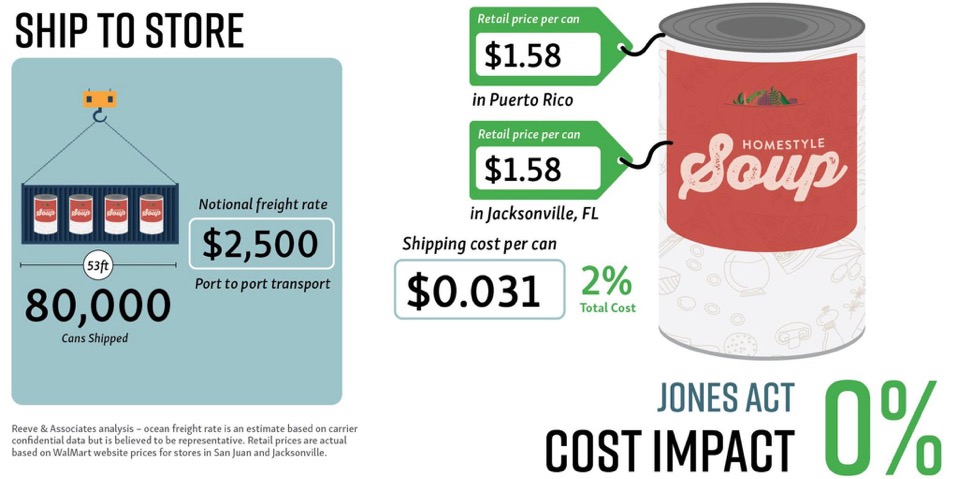 The Jones Act sustains nearly 650,000 American jobs across all 50 states and annually contributing $154 billion to the nation’s economy. An impressive five indirect jobs are created for every one direct domestic maritime job, which results in more than $41 billion in labor compensation.

More than 40,000 American vessels, built in American shipyards, crewed by American mariners, and owned by American companies, comprise this domestic fleet. They move nearly one billion tons of cargo annually – or roughly a quarter of the nation’s freight – along U.S. internal waterways, across the Great Lakes, and over the oceans to Hawaii, Alaska, and Puerto Rico. Shipped goods include a variety of products, from raw materials and commodities like coal and crude oil to consumer products that fill the grocery store shelves nationwide.

As a result, the domestic American maritime industry plays an important role in relieving congestion on the nation’s crowded roads and railways, offering one of the most efficient and economical means of transportation in the world. American carriers have proven to be some of the most creative and innovative in the world, building the first in the world self-unloading bulk vessels, articulated tug-barges, and LNG-powered containerships. American ingenuity also created containerization, which changed global commerce. 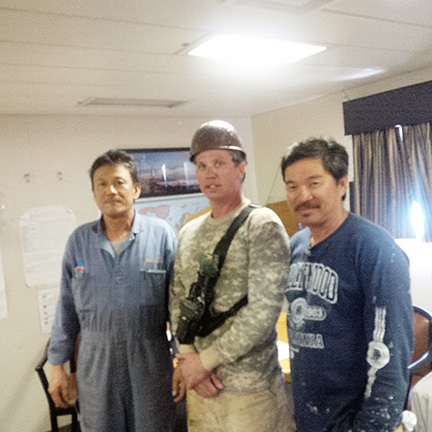 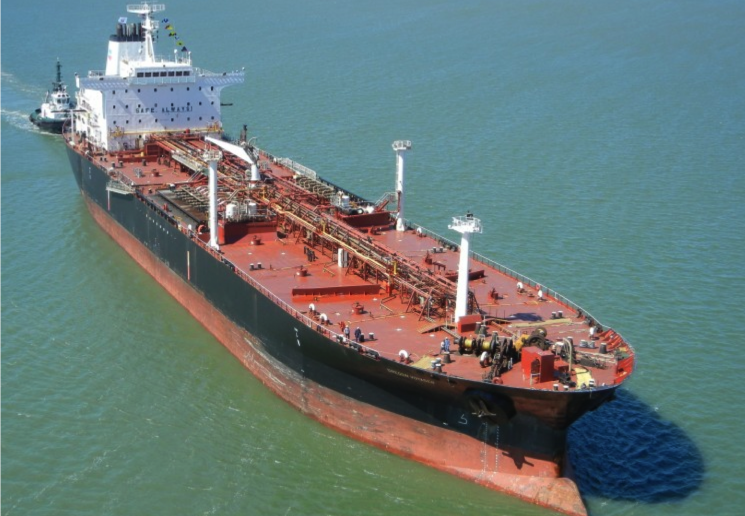 Provisions such as these are not unique in the world, nor are they new to the United States. A survey conducted by the Maritime Administration — an agency of the Department of Transportation — found that 47 nations have laws restricting foreign access to domestic trade. These similar cabotage laws — from the French word “caboter” which means to sail coastwise or “by the capes” — reserve a country’s domestic maritime transportation for its own citizens.

Cabotage principles are designed to guarantee the participation of a country’s citizens in its own domestic trade. These laws foster the development of a merchant marine and give preference to local labor and industry. More importantly, they support national security and protect the domestic economy.

Cabotage laws have been the norm since the early days of our nation. In 1789, the first Congress of the United States restricted registration for coastal trades and fisheries to U.S.-built and U.S.-owned vessels and gave these vessels preferential treatment with respect to tonnage taxes and cargo import duties. Additional cabotage laws were enacted during the intervening years between that first cabotage law and the enactment of the Jones Act over a century later. Variations of these cabotage laws exist today in the U.S. transportation, utility, and communications industries. Federal laws reserve other kinds of U.S. maritime activity to Americans — including passenger ships, fishing in U.S. territorial waters, towing in U.S. harbors or between two points in the United States, salvage operations in the U.S., dredging in U.S. waters, and the exploitation of minerals and other energy resources within the 200 mile economic zone.

Here's how it breaks down around the world in terms of maritime restrictions that nations put on their own system of regulation: