2020 is a presidential election year, with a third of the Senate and every seat in the House on the ballot. See below for more.

President of the United States

Update: January 24, 2021. It was only on January 6th, with count of the electors of the Electoral College, during a special session of Congress, that the winner of the the 2020 U.S. Presidential Election was declared to be Joe Biden. That count, and the vote that confirmed it, was interrupted by an unprecedented riot (some called it an insurrection), and that breached Capitol security and forced the evacuation of the building. The riot led to the second impeachment of President Donald Trump, and a trial in the Senate is pending. See the January edition of the West Coast Sailors for much more.

On January 20th, President Biden was sworn in however and began as series of executive orders that changed the direction of the Executive Branch of the federal government. Elections, as the saying goes, have consequences.

The contest between the incumbent, President Donald Trump, and former Vice-President and Democratic nominee Joe Biden, was on election day too close to call. A protracted period of ballot counting looms, as the mail in ballots are accounted for and possibly challenged. Important battleground states were still counting votes on November 4  and the final results appeared to be days or weeks away. Whatever the outcome, a wave or decisive election with a clear path forward for either side is not likely, especially as the Senate looks to remain in Republican control. Say tuned for more updates.

In mid-August, Biden selected California Senator Kamala Harris as his running mate. They both have the endorsement of the AFL-CIO. The president of the AFL-CIO Rich Trumka said about Harris that “As a senator, she has achieved a perfect AFL-CIO lifetime score, working to create a fairer process for forming a union and protecting our health care and retirement security,” Trumka declared. “We look forward to electing her America’s next vice president.”

The AFL-CIO publishes a useful scorecard on the labor voting records, by both term and lifetime, of every national legislator with continuous updates. Taking into account their districts, this is a quick and revealing check on the actual votes for or against labor supported legislation. It can be accessed here: Congressional Voting Record Scorecards

To aid the membership in its review of political candidates below are links to AFL-CIO labor endorsed candidates by state jurisdictions.

The state of Washington is a key delegation for maritime and labor policy in Congress. Here are the candidates who earned labor's endorsement:

Here is the full endorsement list of all elective offices on the November ballot from the Washington State Labor Council:

The Hawaii AFL-CIO State Federation of Labor's Council of Affiliates met in late Auguest and endorsed Joe Biden for President. They endorsed Kai Kahele for District 2 and left the Jones Act attacker Ed Case in District 1 without unified labor support, as an open endorsement.

SENATE Feinstein, Dianne (D) Next Election: 2024. Harris, Kamala (D)* Next Election: 2022 * If Biden wins the presidency, Harris will become Vice President. In which case, the CA Governor will appoint a new Senator, who could serve until the 2022 election

The ballot measure recommendations are as follows:

The largest and most important measure is Prop 22, which is a direct attack on California's unions. It will permanently remove worker protections for an entire class of workers, now called gig workers, and put California on a path to a right-to-work state. For that reason labor, including the SUP, has dedicated resources to its defeat just as it has fought against recent right-to-work initiatives such as Prop 226 and others. The following is some of the information released by the Federation.

Gig companies are spending $110 million on a campaign to exempt themselves from the law so they can continue to misclassify workers and deny basic protections. These multi-billion dollar gig companies are trying to write their own law to lower standards for all workers and kill union jobs. The preferred and routine method of billionaires and their lawyers and lobbyists in California is to hijack the ballot initiative process to achieve anti-worker aims while proclaiming the opposite. There have been other "right-to-work" initiatives throughout California electoral history -- this is only the latest. It's not creative "disruption" to introduce a misleading measure that would eliminate the minimum wage, overtime pay, safety protections, and paid family and sick leave for hundreds of thousands of workers. That goes by another name: greed. It’s time to once again fight back and vote NO this November on Prop 22.

NO on 22 Talking Points 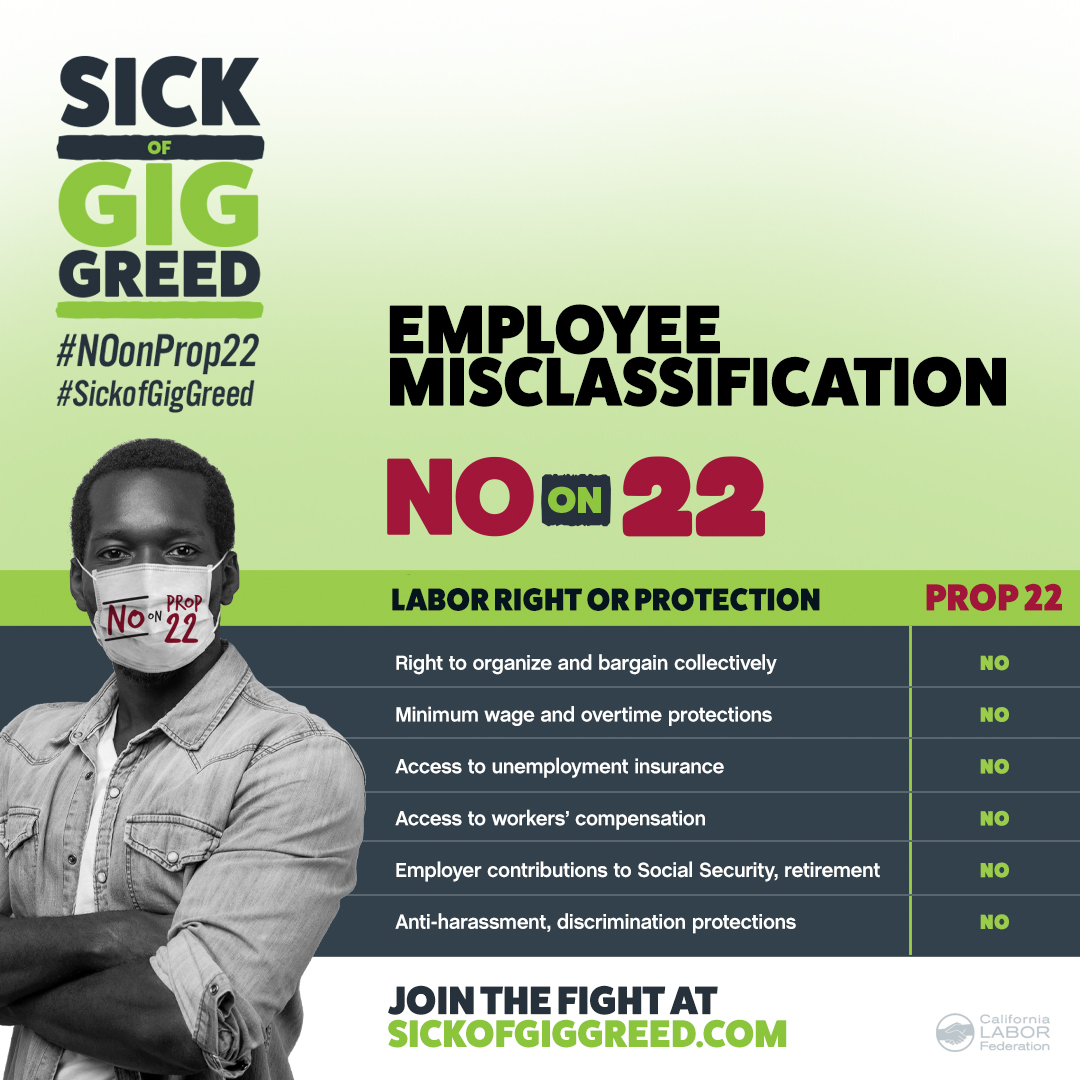 CALIFORNIA FAQ's for the 2020 Election Season

It’s a consequence of the coronavirus pandemic: All registered and active California voters should receive a ballot in the mail by Oct. 12. If you are among the 72% of voters used to voting by mail, proceed as usual. If you’re used to going to the polls, you can still submit your ballot in person — either at a designated drop off point or a polling place.

HOW DO I REGISTER?

You can register online before Oct. 19. The state will try to find your signature on file with the DMV. If it doesn’t have it, you may have to print out the application and mail it in. And if you missed the October deadline, don’t panic. You can still register at your local county elections office, polling place, or vote center. You can also call your county registrar’s office.

DO I HAVE TO VOTE BY MAIL?

No. You can still vote in person if you like. But depending on where you live, your county may have a reduced number of polling places. Find your closest polling place or drop box.

DOES EVERYONE GET A BALLOT IN THE MAIL THIS TIME?

Not everyone. To keep potential coronavirus-carriers from crowding into polling places this year, the state opted to send every registered and active voter a ballot. If you aren’t registered — or if you’ve moved and haven’t voted in a while — you probably won’t get one. Check your registration status and make sure it’s accurate.

There isn’t a hard deadline for when a ballot must arrive in your mailbox. But state law requires county elections officials to begin mailing them out on October 5 — that’s a Monday — and they have five days to get them all in the mail. If you still haven’t received your ballot by the following Monday — Oct. 12 — and you were expecting one, reach out to your county registrar’s office.

CAN I VOTE IF I DON’T HAVE A PERMANENT ADDRESS?

Yes. If you have a temporary location where you can receive mail — say, a shelter or the home of a friend — you can use that address when you register. You can even receive your ballot there. If you don’t have a temporary address, register with an intersection close to where you frequently stay or, if available, just check the box that says “I do not have a street address.” In that case, you will have to vote in person.